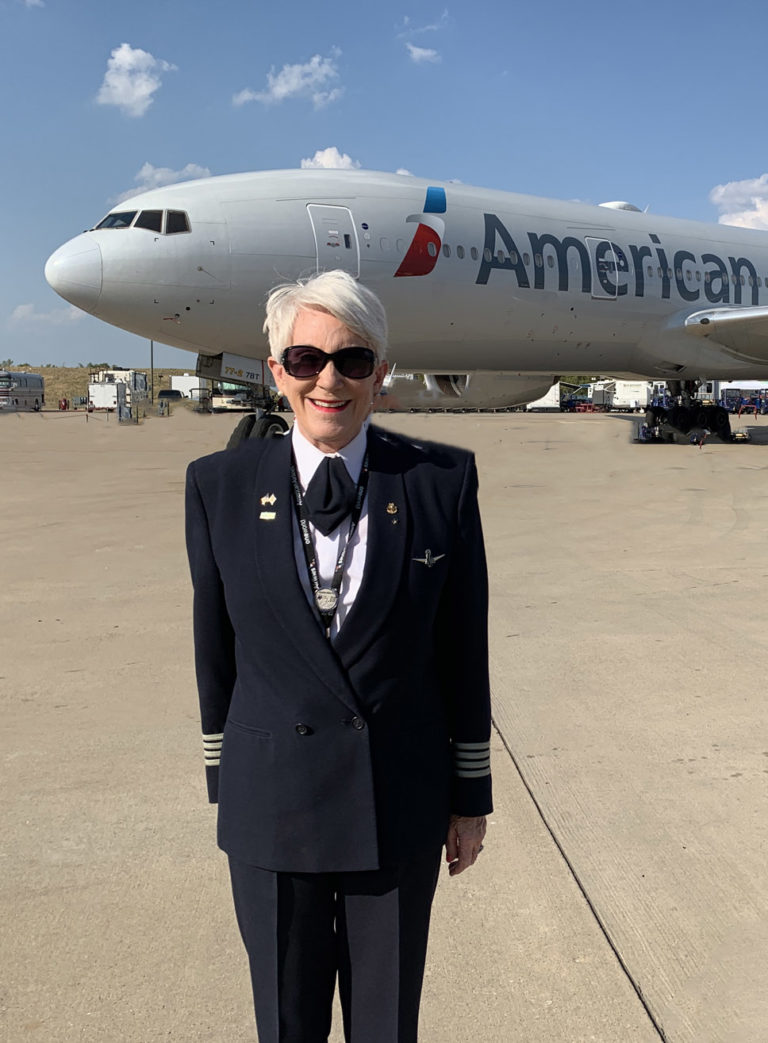 Beverley – I began flying in 1971 and soloed at Page Field in my hometown of Ft. Myers, Florida. I then returned to Texas for my sophomore year at Texas Christian University where I enrolled at a flight school at Meacham Field in Ft. Worth. It would be there that I obtained all of my licenses and ratings from Private to ATP.

What is your current job, type of aircraft, and location?

Beverley:  Even though I am retired from the airlines, I still wanted to be in the air.  Currently, I am flying an EMB Phenom 100 that is based in Oklahoma City.

Beverley: Unfortunately, I didn’t know a single female pilot in the early 70s.  I would say that most of the guys I flew with during my instructing, corporate and freight flying were for the most part very encouraging, but I never really thought of them as mentors.  We were just all working our way up in the field of aviation.  Probably my biggest supporter was a fellow American Pilot who was hired in June of 1976 and I was hired in October of that same year.

Beverley: My parents used to visit an elderly couple for cocktails in the afternoons and I would go with them.  I was probably around 4 and they had a statue of Icarus.  I loved holding and studying his wings and thought how fun it must be to fly.  I don’t remember a time when I wasn’t obsessed with airplanes and always wanted to go to the airport to watch the jets land at night.  I never forgot watching them as I stood next to the chain link fence that wasn’t far from Runway 5.  That was the beginning of my desire to learn to fly and I was 8 years old at the time.  I wanted to take lessons when I was 16, but my family and I were busy raising, training, and showing registered quarter horses and it wasn’t until we sold the ranch that my parents would agree to my flight lessons.  I took my first lesson and walked into my parents house and announced to them that I would fly for the rest of my life.  Little did I know then that that would prove to be true!

Beverley: I would actually love to get a type on a corporate jet, but my daughter says I’m too old…LOL.

While waiting for a call or on a layover, what are some activities that you have enjoyed with other flight crew members?

Beverley: No matter where in the world I was, I always enjoyed dinner with my crew; and the more the merrier.  I loved it when the whole crew would go out which we often did.  My First Officer and I went snow skiing in Vale on a layover, but I can’t say I did anything exotic like climbing Mt. Fuji.  Did that after I retired with a group of airline folks with my husband and daughter.

Do you live in your base?

Beverley: For the most part I lived in base in New York and Dallas, but then commuted to Washington DC to fly Captain and to Chicago for 5 years as a Checkairman on the B-777 from Dallas.

Beverley: The biggest benefit is the camaraderie with other women pilots who do exactly what you do or did.  I also love sharing time with some of our newer members as they embark on this amazing career that most of us have fallen in love with.  It’s a lifestyle that many don’t understand and when you are at the conference you know everyone in the room “gets it.”

What was one of your favorite ISA+21 Conferences?

Beverley: Gosh that’s a tough one as I’ve enjoyed so many of them.  I suppose the very first one in Las Vegas in 1978 as we were all so starstruck to see other women pilots in uniform.  In those days you could go months at a time without ever seeing another female pilot. Then I’d have to say our recent one in Sydney was just fabulous and enjoyed by all.  Qantas sponsored an incredible event and one that is hard to top.