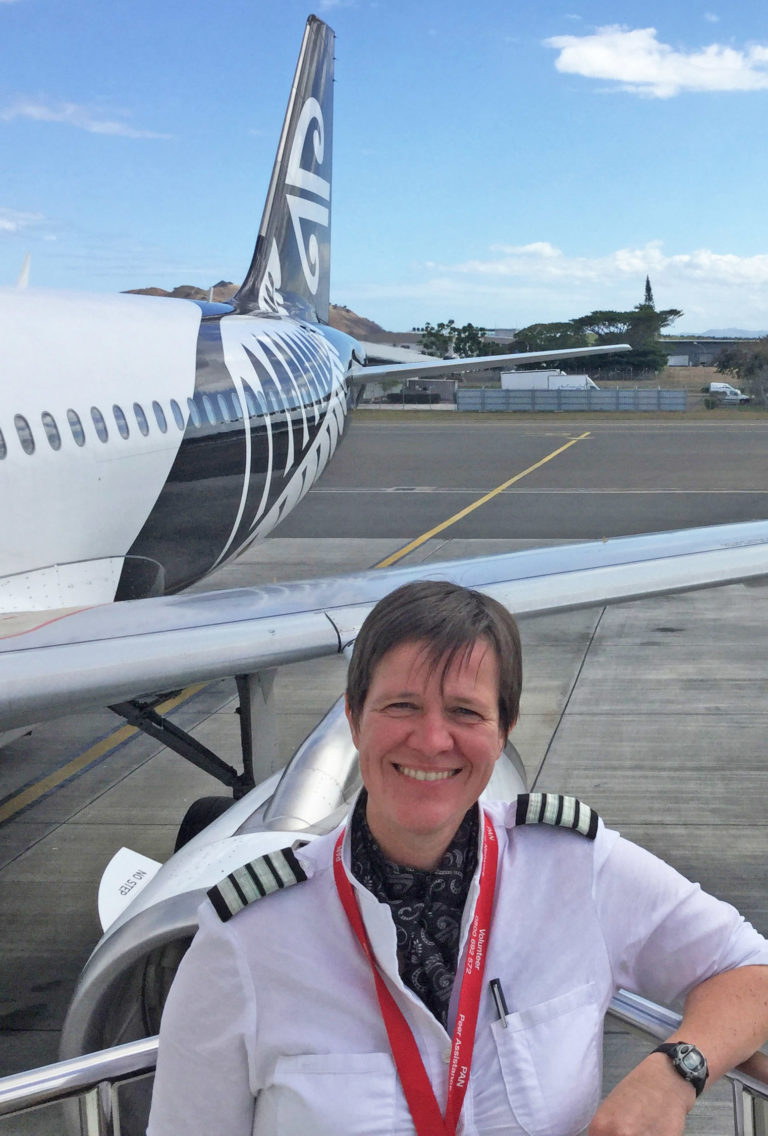 Thyra:
I started at University of Illinois in August 1989, graduated 1993 with a Diploma for the Professional Pilot Curriculum and a BS in Business Administration.

Thyra:
I started on the Beechcraft Sport/Sundowners and remember feeling nervous about getting checked out in the C152/172 due to the “high wing”. I taught in the Tampico/Trinidads and briefly flew the C210/310 on evening bank check runs. There were a few other light aircraft here and there for training, aerobatics, or fun.

Professionally I started with WestAir (United Express) on the Jetstream 3100.  When they folded, I moved from “Sundance” on the West Coast to “Blue Ridge” on the East Coast on the Jetstream 3200 with Atlantic Coast Airlines.  Then I started at USAirways on the 737-200 and got to fly red coloured jets. Due to my furlough post 9/11 our now young family of four moved to New Zealand.  I converted to CAA license and then flew B737-300 now in yellow for Air New Zealand’s subsidiary Freedom Air.  I took the first chance to switch onto the B747-400 at Air New Zealand. To get a little more time at home with my third tiny human, I bid onto the B777-200/300, then followed the seniority list opportunities A320 F/O, B767 F/O and A320/321 CPT.

Thyra:
None officially, but I found many to look up to through WAI, the Ninetynines and ISA+21.

Gloria Abellaneda -on the flying team a few years ahead of me at Uni,  Wally Funk whom I met at NIFA, Cheryl Stearns at USAirways, Jenny Beatty-ISA+21 and Ninetynines, writer, founder of PPLI, all the Founding women of ISA+21! I never realised how much it matters to see someone who looks just a little bit like you.

Thyra:
I wanted to see the world and thought it would be more fun in the front office, and have a much better view than the little hole of a window I had in the back of a Pan Am 747 on an Atlantic Crossing, on tour with the Chicago Youth Sympthony Orchestra, when I was 17.  My favourite seat was at the wings so I could watch and wonder what all those moving bits were for and where all the hoses and wires connected to when the spoilers lifted on landing.

Thyra:
I hope to retire from the left seat of something “heavy” and get a seaplane rating.

Thyra:
I live in base. For  a while I commuted by ferry from Waiheke Island. The commute was beautiful and only took 1.5-3hrs depending on traffic and ferry timing but I often needed an extra night in town before or after work.  In the states my commute was 2.5hr drive, no traffic no blizzard, so it was pretty idyllic.

Thyra:
Adjusting to changing family life and moving. The kids leave home whether I’m ready or not. We moved to town for Secondary schools and easier commute for me. Then lockdown and grandkids  moved in, so we found a bigger house…..never a dull moment.

Thyra:
Why not?  You get to operate amazing machinery with awesome crew members, watch the most beautiful sunrises and sunsets and fly to incredible locations.  It’s predictable yet every flight is different.  The schedule (and pay) is much better in the front of the plane.  We now have maternity uniforms, parental leave, and flexible rostering options…it keeps getting better.

Sometimes it’s tough, especially at the beginning of your career, when kids come along  or when set backs happen.  Believe in yourself because having a career that is fun and challenging is very satisfying.

Thyra:
Energising camaraderie! I felt like I gained 600+ friends who understand me. It’s inspiring to hear how each of our members is advocating for women pilots at their own airlines and inspiring the next generation. I’m so grateful to those ahead of me who forged the way so that I can enjoy a rewarding career.