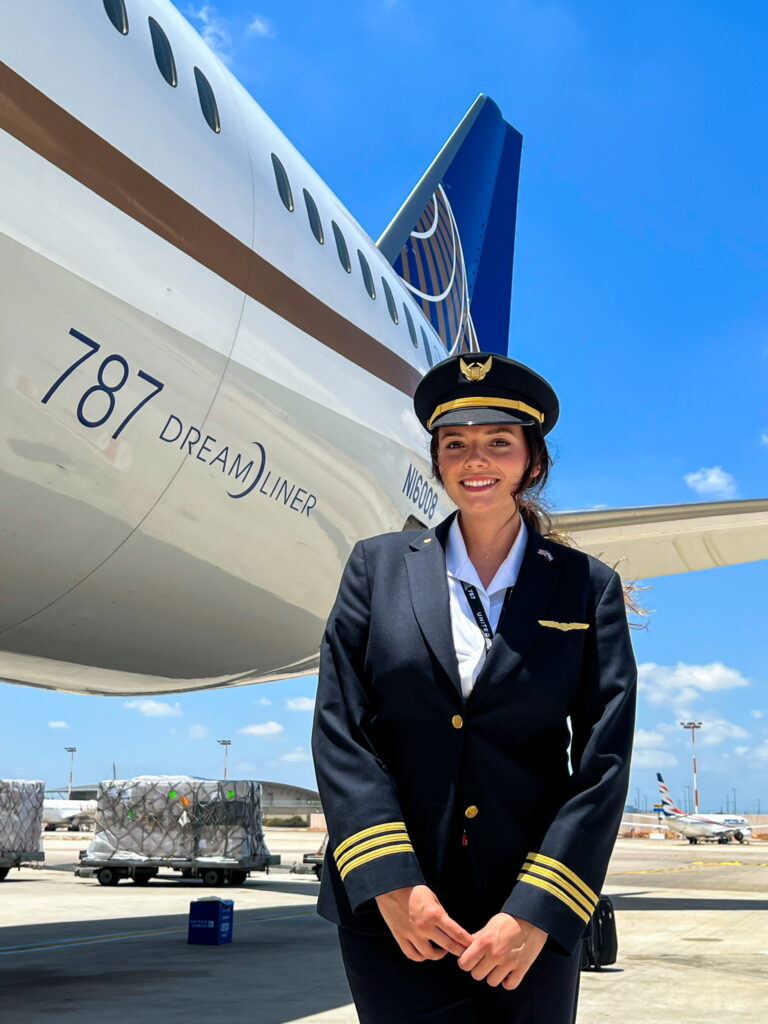 Where did you earn your ratings that ultimately brought you to the flight deck?

Natasha:
I went to Middle Tennessee State University in Murfreesboro, TN. There, I received a Bachelor of Science in Aerospace while earning all of my certificates! I did all of my flying at the University from Private through CFII.

How did you get your flight hours to reach the requirements for airline flying?

Natasha:
I was a flight instructor at a local Part 61 flight school in Murfreesboro, TN and was also selected to fly the university’s King Air 200.

Who have been your mentors along the way?

Natasha:
I have countless people to thank for their help and support throughout my journey. I was lucky to grow up watching my dad fly and learn about the industry from him.
My dad has always been my biggest supporter and mentor in my career. He is a captain for Delta Air Lines and has helped me get to where I am today.

Natasha:
Rolling off the last question, I owe it all to my dad. I think my first time going to work with him was at 3 weeks old. My whole childhood revolved around airplanes! I remember going on his flights and begging him to let me touch all of the buttons. There was never a time in my life that this wasn’t exactly what I knew I was meant to do.

Natasha:
I am truly enjoying every moment of the journey and have dreamt my whole life of being in the position I’m in now. One day I hope to upgrade to Captain here at United Airlines.

Outside of the flight deck I hope to find new ways to get involved in the aviation community and mentor other young pilots throughout their journey.

What has been your main motivation to get to a legacy carrier at such a young age?Natasha:
I have been blessed in more ways than one. A huge part of this industry is timing. Timing really worked out in my favor. I was lucky to always know what I wanted to do and be able to find a pathway that supported the timeline I wanted to achieve. I had amazing mentors to help me along the way as well.

What was a surreal or full circle moment in your career?

Natasha:The most amazing flight of my career was earlier this year in May. My first flight on the B787 was to Schiphol, Amsterdam. I am Dutch and the majority of my family still lives in Amsterdam. I was able to take my parents on my first flight and they were on board for my first landing- AND it was my dads birthday. Growing up I used to bike to Schiphol with my dad and watch planes land, dreaming of the day that could be me. It was absolutely surreal to be able to do that. The captain had told the passengers that I was the youngest person to fly the B787 here in the United States and after the flight almost every passenger congratulated me. I had young girls and their mothers come up and want to take pictures and it felt amazing to be able to show them what they are capable of too. It was a very meaningful flight for me.

Natasha:
No dream is too big! Go for it. There are SO many different options and pathways- there is something for everyone. Reach out to as many people as you can, there are countless groups and mentors available and willing to help guide you.

Natasha:
Being a new member, I’m so excited to have joined and be a part of an organization that brings together and supports other women in our industry from all over the world. I am forever grateful to all of the women who laid the groundwork for myself and others to be able to do what we love. I hope to pay it forward. Thank you!