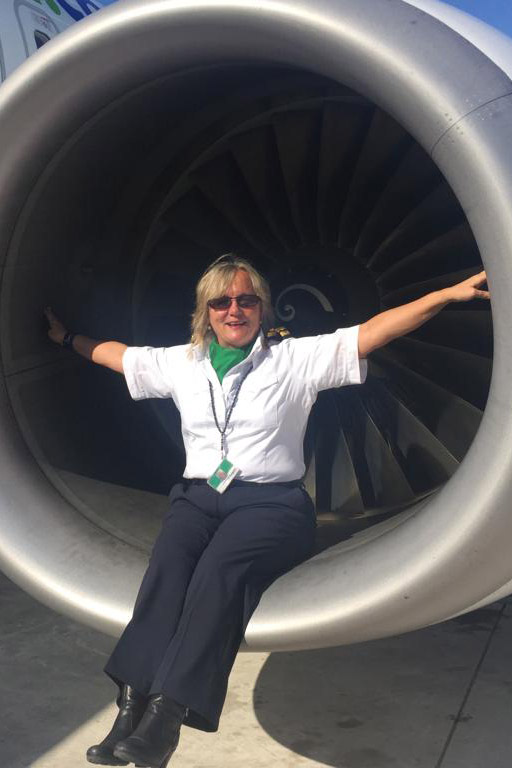 Liz:
The Caribbean Aviation Training Institute (in Mausica, Trinidad ) – a school run by ICAO for the Caribbean region. 1981-1982

Liz:
Not really, When I started in the 1980s there were no female pilots in the Caribbean.  I was the first with our regional carrier (LIAT), so pretty much had to battle through for myself.

Previous
Next
How did you become interested in aviation?

Liz:
I used to live next to an airport (TLPC/SLC) plus everyone living near the capital city in St. Lucia saw the planes passing every day. It seemed like a cool job to me!

Liz:
As I’m almost 60 and the situation after COVID-19 is not ideal, I can’t say I have any goals – very appreciative that this chaos happened at the end of my career and feel for those women who were just starting out when the pandemic hit.  Mind you, it seems the industry will need every able bodied airman/ woman in the next few years so hope any young girl just starting has a great future in this wonderful career!

When did you know you wanted to be a pilot?

Liz:
I’ve wanted to fly since I was 12 years old.  I have a page from a UK newspaper “Day 1 at Mach 2: The 1st commercial flight of the Concord.”  That historic flight was on my 13th birthday which I took as a sign that it would all work out and I would become a pilot!

I grew up on a small Caribbean island (St Lucia) where my Dad had come to work.  No chance to build hours, I applied to the Royal Air Force (RAF).  I am a UK citizen & born in England, but they didn’t accept women for flight officer positions in the 1970s.  Luckily I won a full ride scholarship to a UN/ICAO run regional school in Trinidad.  I left there at 19 with a Commercial Pilot License, Multi-Engine and Instrument Ratings and was hired by the local airline a few months later. In the following four years I flew the Embraer Bandeirante, Twin Otter and the Dash 8 (100 series) when it was a new airplane.  Six, eight even ten landings in a day between various Caribbean islands!

In flying school, I met and fell in love with a Surinamese instructor, we got married in 1984 and moved to the Netherlands in 1987. Unfortunately, I had to do all my theory exams over again in Dutch!  This was not what the Dutch FAA had told me before I moved!!  Anyway, I learnt Dutch, took the exams (essay type questions not multiple choice as they are now), dealt with my mom’s sudden death at 56 and then, almost two years later, had an amazing week when I was offered two jobs!

I started with Transavia, which was later bought over by KLM.  Less than three years later, I got my 4th stripe and at 29 was one of the youngest female jet captains in Europe.  Transavia has always flown 737s; I flew the -300 round dial, then EFIS, then the NG -700 & -800. We fly to more than 100 European & North African destinations including some very short and tricky CAT C runways (Madeira, Samos).

In October 1989, I was co-pilot in the first all-female crew in the Netherlands. Transavia hired many more women, so I often flew with a female colleague and have heard all the usual comments, however only once did a man who was scared of flying demand to get off!

Transavia was traditionally busy in the summer but not so much in the winter so they often hired us out on wet leases.  I have been temporarily based in Bali (flying to Australia), South Africa, Egypt, Munich, and Trinidad (flying to Toronto).  I have great memories of all these places…

I became a check pilot (TRI) doing initial and recurrent simulator and line experience flights with new co-pilots, I also taught “fear of flying” courses and CRM for both pilots and cabin crew. At the same time I was on the ISA+21 Board of Directors for 12 years, mostly as Events Director but also two years as  Chairwoman.  I was ISA+21’s IFALPA rep for ten years and also was a union rep for eight years in Transavia’s VNV Dutch ALPA group.

In 2020, COVID-19 hit and I had to retire early.  On my last flight I had our most junior woman pilot as my first officer and four pursers who were good friends from over the years as cabin crew.  Now I’m getting used to retired life in my childhood home in St Lucia.  Looking forward to seeing friends in Dublin at the ISA+21 Conference!

Liz:
My most recent challenge was being early retired due COVID-19.  My company (Transavia – a fully owned KLM subsidiary) has a historical retirement age of 58. This is from the time that you lost your medical at 60.  As of about ten years ago, we could voluntarily work from 58 until 60 on a 50% contract.  I had signed up for that but unfortunately the contracts were not given once COVID hit.  I was told on 29 Sept 2020, that my last flight day would be 26th October 2020.  It was quite a shock as I expected to be able to fly for another two years… I do miss my job.

Liz:
Go for it!  Believe in yourself. Nowadays there are many ways to get support and ISA+21 is one of them!  While women are still seriously underrepresented on the flight deck, it is improving each year.  There are now many mentors, women who went through the process in the last couple decades and even a few of us dinosaurs from the 1980s or even earlier who are happy to answer questions and give support.  It’s still a dream job.

Liz:
Being an ISA+21 member has introduced me to a number of great friends!  I’ve been a member since the early 1990s, I was on the Board of Directors for 12 years with two as Chairwoman, was Events Director for eight and then a couple years helping out in Education & Outreach.  I have so many friends now, all over the world, that I would not have met otherwise.  And while I was already a Captain when I joined, I know many ISA+21 members get help moving to their dream airline through contacts and friends made at our events.

Liz has been featured in numerous publications in her 30+ years as an airline pilot.