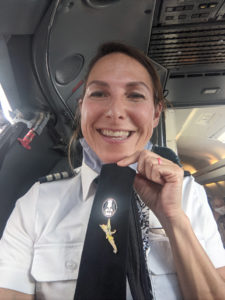 Kristina:
The Air Force paid for me to obtain my private pilot’s license in the Fall of 2002 in Goldsboro, NC while on “casual status” as a lieutenant. I went through Joint Pilot Training with the Navy in Whiting Field, FL, from January to August 2003. From there I went to Corpust Christi, TX for Joint Advanced Multi-engine Pilot training with the Navy until May of 2004.

Kristina:
I started in the C172 and C182 for my private pilot license, then T-34 and T-44 for joint pilot training. I flew the C130E in Japan (the same ones that had flown in Vietnam), and the C130H3/H2 at Peterson AFB, and during my three combat deployments. I most recently flew the Embraer 145 for CommutAir.

What is your current type of aircraft and location?

Kristina:
This is an interesting time to be asking that question! My final day at CommutAir flying the EMB145 out of Denver was November 7th.  On November 8th, I started working at Global Crossing and train to fly the Airbus 320. I actually met the recruiting team from Global Crossing at the 2021 ISA+21 Conference in Atlanta!

Kristina:
YES! I’ve been blessed with amazing mentors. My two most notable mentors being (ret.) Lt Col Blake Jessen, and Pearl Brummett Judd, a Women Aviation Service Pilot (WASP), I met at a WAI conference in 2005.

The Navy assigns us “on-wings” during pilot training as our initial instructors to help ensure consistency during the first flights in our new plane. Lt Col Jessen was my on-wing for Joint Advanced Multi-engine Pilot Training in the Fall of 2003. He is a brilliant man, and was an incredible instructor. I remember one day he was tired of me over using the rudder to steer the T-44. Our flight was cancelled due to weather, so he took me out for “taxi practice.” He told me to put my feet on the floor, and taught me to use differential thrust to steer the plane!

Lt Col Jessen remained a pivotal mentor in my life. In 2005, he wrote a recommendation for me to get hired by the 731st Airlift Squadron at Peterson Air Force Base. When I became an occupational therapist (OT) in 2012, he guided me to Rosemary White, a world renowned pediatric OT, who allowed me to do my internship at her practice in Seattle. Lt Col Jessen even set it up so I could stay at his mother’s house since I was a broke student! When United Airlines started hiring again, Lt Col Jessen reached out immediately, offered to write a recommendation and arranged a formal meet and greet with his chief pilot. I call him my “aviation dad!”

Pearl Brummett Judd is hard to talk about without crying. When I met her at the WAI conference in 2005 in my flight suit, I was completely drawn to her. She took my hand and said “I’m going to adopt you.”  We stayed in touch, and I would call her often asking for life advice on every topic; careers, marriage, nothing was off the table. In 2008, the 731st Airlift Squadron put together the first ever, all-female crew to fly the WASPs on their final military flight to Avenger Field, TX. When Pearl walked off the bus to fly with me, I was overwhelmed with emotion. I remember her standing on the flight deck with me, smiling from ear to ear. She was 85 at the time.  Pearl passed in 2015. I think about her often.

Kristina:
Well, my interest in aviation came from drastically converging points. My father was an airline pilot, and when I was in fourth grade he took me to fly a simulator in D.C. It was amazing. Unfortunately, as my brothers and I got older, my father started having difficulty balancing flying and his need to be an authoritarian at home. For a seventeen year-old, joining the Air Force seemed to be a small sacrifice to escape the toxic environment he had created. My graduating class at the Air Force Academy in 2002, had unlimited pilot slots, so I thought to myself “well, that seems better than any other job I could get in the Air Force.” Yikes! Sorry, my backstory is more tragic than inspiring, so I’ll add a little more.

I left flying in 2010 to focus on pursuing my MA in occupational therapy, and work with Veterans. When I had difficulty finding a job in 2019, I faced a dilemma. I needed to contribute financially for my family, but wasn’t able to find a suitable OT job. At the time there was a pilot shortage, so I threw in my application. Now that I’m back flying, I can’t imagine ever leaving. I think ultimately, I had to know, deep down in my core, that being an airline pilot wouldn’t turn me into a toxic parent.

How has your aviation journey been different than you planned?

Kristina:
I guess I alluded to the giant gap in my aviation journey in the last question. So I left home as a really angry 17 year old in 1997, and then found a wonderful and supportive “family” in the Air Force. In 2008,  I woke up and realized I wasn’t mad anymore and suddenly I didn’t know what to do with my life. I wanted a family and felt driven to experience other things; namely the “civilian world.” So I enrolled in a full time, 3 year, year-round master’s program in 2009, in Oregon that started a month after I finished my aircraft commander upgrade. I met my husband while I was at school, and felt I had outgrown the military and flying, so I left both in 2010.

My husband and I moved to a town of 1500 people in La Pine, Oregon. I was a travelling OT with a really flexible schedule and loved it. We started making “power bars” for dogs, and I learned about this great entrepreneur program for Veterans called the Institute for Military Veterans and Families. I wound up on Shark Tank in 2015, and landed a deal with Daymond John. It was a blast working with him, traveling and networking for the business. He even asked me to be in his NYT Bestselling book, Rise and Grind!

After becoming pregnant with my first daughter, Madeline (now 5) we moved to VT to be closer to family, and I began to focus on being a mom. After I had my second daughter, Mabel (now 3), I faced the dilemma of finding work. My husband had also just lost his great insurance benefits, and having babies on a bad insurance plan was difficult to say the least. That’s when I decided to go back to the military as well. I didn’t go back as a flyer, however, because I didn’t want to juggle flying for the airlines and for the military at the same time. Ultimately, the nine year gap was life changing. It made me realize how much I love the military and flying. I’m no longer motivated by anger, but a heart-driven passion for both. I think I’m a better pilot and officer because of it.

Kristina:
I’m really happy at Global Crossing right now.  In the future, I’d love to fly internationally for Delta, American, or United! In no particular order of preference LOL, but preferably at a base close to home.

Kristina:
I was commuting to Denver with CommutAir which is one of the big reasons I left for Global Crossing. It was a four hour flight to Denver. Most of the time I woke up around 5AM EST, jumped into the car at 6EST and pulled chocks at 8 EST, then fly four hours and land at 10 AM MST. Then I’d wait until my trip started around 2MST. So, I’d been commuting for about 11 hours prior to starting my first trip. It definitely helped me realize my ultimate aviation goal is the closest domicile possible.

Kristina:
As a parent, Madeline cries sometimes when I leave. It breaks my heart. She is very intense and emotional. I’m often conflicted when I leave, wondering if I’m being selfish. Then I think, if I quit flying, what kind of message will I be sending? Do I stay at home and be a martyr to make everyone else happy, or do I go out and fill that space in my heart that only flying can? I don’t know at what point the guilt goes away. I’m lucky to have a wonderful and supportive spouse, but juggling my kids’ emotions when I leave has been the greatest challenge.

Kristina:
With every little girl, I always emphasize they can be whatever they want to be. If a kiddo asked me for my advice on how to do it, I would recommend the guard and reserve any day. I loved flying for the military. I felt that I faced way less stereotypes and gender bias flying for the military from 2003-2010, than I have in the civilian sector today. I attended the Air Force’s virtual conference for Women in 2021, and I’m floored with how progressive they’ve become, and how supportive they are of women’s issues.

Kristina:
It gives me an excuse to hang out with Pam Perdue, HAHA! Just kidding, sort of, but she is the inspiration for me joining. When I met her at WAI in 2019, I was like “I want to hang out with the women she hangs out with!” I stayed in touch with her, and as soon as she told me about the Atlanta conference I signed up. The biggest benefit was getting women’s perspectives on flying at the conference. I’ve found that many of the male pilots I’ve talked to emphasize “the grind” and seniority. When I went to ISA+21 almost all the female pilots emphasized “quality of life.”