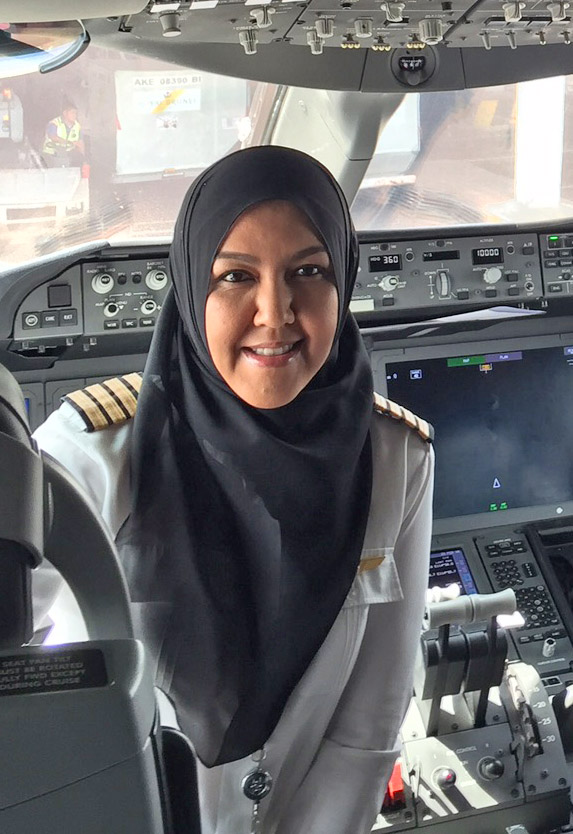 Czarena:
Most of my senior colleagues have mentored me and groomed me to be the pilot I am today.

Czarena:
At the age of 9 before the locked flight-deck door regulation, I had the opportunity to sit in the flight deck of a Boeing 757 for a landing. From that moment, my dream was to become a pilot.

Czarena:
Since the beginning of 2021, I have embarked on a new journey in management and have taken up the challenge as Assistant Chief Pilot (Tech & Admin) on our Boeing fleet which is effectively a Fleet Manager.  I would like to eventually become a Line Trainer.

Czarena:
I live at base which is Brunei.

Czarena:
The COVID-19 pandemic has affected the global aviation industry significantly but I am so blessed to still be flying and have even been given the opportunity for a new role in my career in management.  Flying so infrequently is the greatest challenge of late, but we do what we can in preparation for when borders reopen and flights begin ramping up.

Czarena:
If you can dream it, you can do it, but you have to believe in yourself. Work hard because no one is going to do it for you.  Take things one step at a time.  It will be hard but hard does not mean impossible and also the harder it is, the greater the feeling when you achieve it.

Czarena:
I joined ISA+21 when introduced by a member I met in Atchinson, Kansas.  I feel a sense of belonging globally as the number of women pilots in my region is so small, to be a member of ISA+21 allows me to connect with all other women pilots around the world.

In 2016, I made world headlines when I operated an all female (trio) flight deck to Saudi Arabia. This gained global interest because of where we flew to, however this was a normal scheduled flight and we took a photo to celebrate Brunei’s National Day to post on our social media. That led to interviews with numerous magazines, newspapers, organizations and we even had an interview on Al-Jazeera.

In 2018, I had the privilege of being inducted as an honoree of the International Forest of Friendship for being the first woman airline pilot in Brunei and any Flag Carrier in South East Asia.