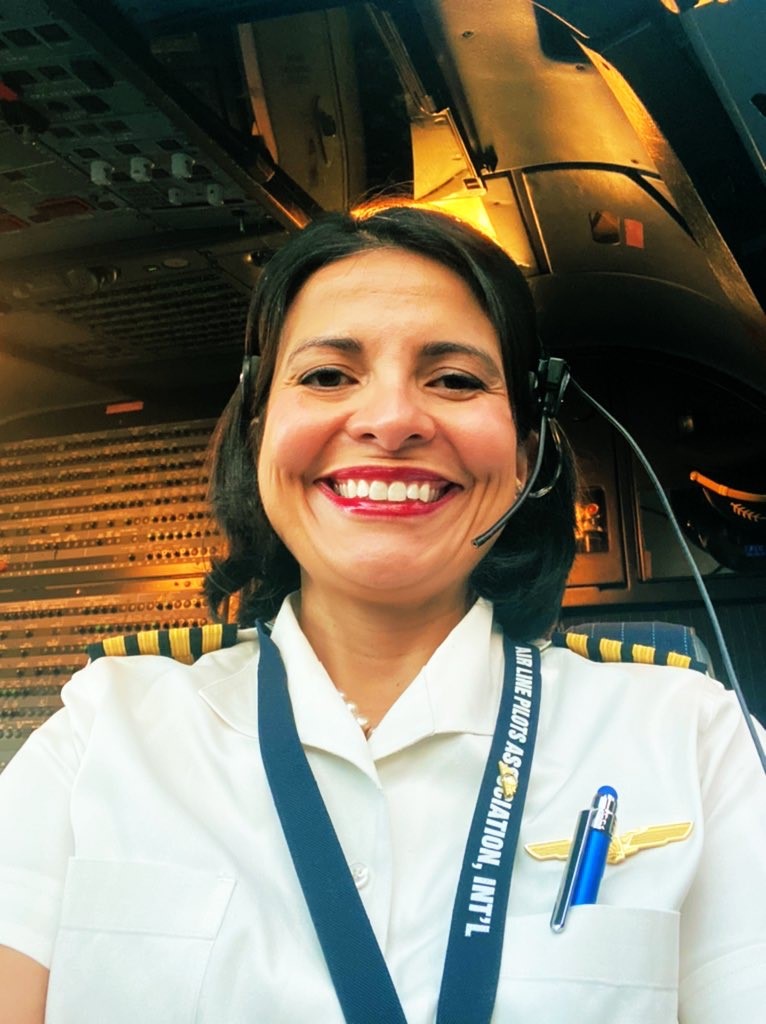 Claudia:
I attended several different flight schools to obtain my certificates and ratings. In Orlando, FL, I started for Private and Instrument, Kissimmee, FL, for Single Engine Commercial and Multi-Engine Commercial, and then Peachtree City, GA, for CFI/CFII/MEI/ATP.

Claudia:
I have had various mentors throughout the years. When I first started in aviation, I had more male mentors than female mentors since women in the airlines were few and far between. I’m grateful that as my career advanced, I was able to connect with female mentors who guided me through the ups and downs of the aviation industry.

Claudia:
I joke around that I am a child of Non-Rev. It pains my soul to purchase a ticket.  My dad worked for People’s Express which was purchased by Continental Airlines in the mid-1980s. We lived in Elizabeth, NJ, which is very close to Newark and a 10-minute drive to my dad’s office. We were very much a lower-middle-class family trying to get by. My father had been laid off from his job at the Singer Corporation in 1981. He was working as a hotel shuttle driver for two different hotels when a passenger on his van discovered that my father had extensive experience in logistics and import/export laws. This passenger recommended my dad for a job working for Certified Freight Services, which did cargo planning and shipping, mostly on People’s Express. We would go to the airport each night he was working to bring my dad dinner. Eating out or going to the cafeteria was not a luxury we could afford. I would sit in the back of the car and watch the airplanes take off and land. Sometimes my dad would regale me with the plane’s total load capacity and their destination. My dad put some of his tips from driving the shuttle aside to purchase an encyclopedia set when I was 9, and I would go home and look up some of these “far” off destinations like Dayton, Ohio, or London, England. However, we did not realize that being a pilot was an option. This was the early 80’s and I didn’t meet my first female pilot until I began my career as a flight attendant at Delta Airlines in 1998.

Claudia:
After a couple of years of flying the line, I hope I can become a Line Check Pilot on the Airbus. We need more women, especially women of color, in leadership positions so that young women and girls can believe that there is a space for them in aviation.

What are you most excited about with the ISA+21 Atlanta Conference?

Claudia:
I’m excited that it is right in my backyard! This is my first conference and I have many friends and acquaintances that are attending. It’s exciting to get to know the organization better and the successful women behind it.

Claudia:
It sounds silly, but my most recent challenge was unlearning the Airbus systems and flight computer and learning the Boeing way of flying the aircraft. I kept trying to correlate what I saw in the FMA to what I knew was true of the Airbus, and it just didn’t work. It took a few weeks, but I’m feeling confident in the B777.

Claudia:
I would tell young women and girls that there is an army of female pilots that want them to succeed, and we will be there every step of the way. Do not let anyone tell you that it cannot be done, that you’re not tall/mechanically inclined/ or smart enough. You are enough just the way you are. There are several organizations that will provide mentors from all walks of life that took different paths to get to where they are. One path is not better than another. Be open to new experiences and get used to getting out of your comfort zone. It’s the only way you’ll grow and learn as a pilot.

How has honoring your heritage influenced you throughout your aviation journey?

Claudia:
This is hard for me to answer. I didn’t honor my heritage for a very long time. Growing up Latina, I was painfully aware of how different my culture was to the rest of the US. Children can be cruel, but adults can be crueler. People would often make fun of my parent’s accent, behind their back, or to their face. I just wanted to fit in and not be seen as “less than” which was how I felt because of my Latinidad. I remember trying to teach my parents how not to roll their R’s so they could sound more American. I would refuse to speak Spanish to them in public, even though I could see how hurt they were that their daughter kept turning her back on our culture and how difficult it could be for my mother to process what I was saying. I was a rebel child who refused to listen to Colombian songs that described a country of paradise and refused to learn how to dance cumbia and salsa. I would avoid Colombian food and seek out McDonald’s and anything else that symbolized the US and that I was American. These are the ugly truths that many immigrants face coming to the US, and how children of these immigrants can internalize a hatred of their culture by the blatant and subtle rejection they deal with each day. My parents made many sacrifices in order to ensure that not only would my siblings and I have a good life, but we would also be able to forge our own path to success. My parents worked extremely hard, both often having multiple jobs each in the early days to make sure we had a place to call home and food to eat. It’s a shame I carry with me to this day, and I have tried to make up for it in many ways. I always attribute my success to the love and support of my parents. They instilled in me a work ethic and a tenacity that did not allow me to give up. I volunteer with the Latino Pilots Association as their Director of Community Outreach and Relations. In this role, I mentor many Latina women that suffer microaggressions because of their gender, ethnicity, and/or race. Some of these women did not shy away from their Latin cultural heritage and in fact, embraced it with a fierceness I wish I had when I was a child and young adult. I tell every young woman or girl who asks me where I am from that I am Colombian, and I am the daughter of proud Colombians, who left everything and everyone they ever knew, to make sure I could sit in the flight deck and say “Buenos Dias, Bienvedios a Bordo”.

Claudia:
The benefit of being an ISA+21 member is the camaraderie and shared experience that we all have. The ability to support the next generation of pilots through mentorship and scholarships, in addition to paving the way to make it easier for them to fulfill their career aspirations is invaluable. 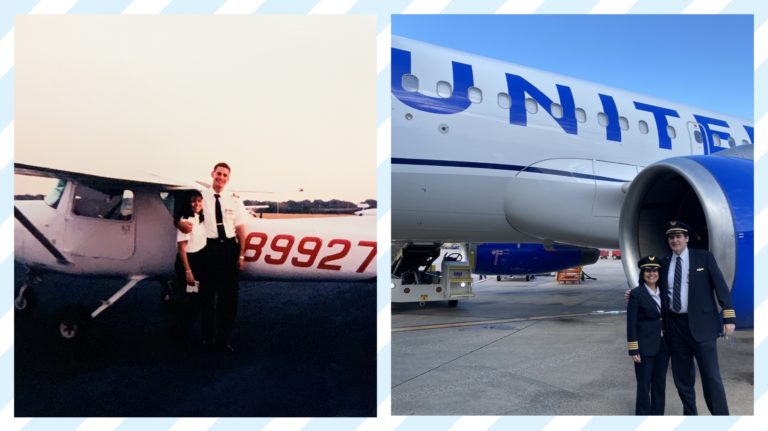 Claudia after her first solo as a student pilot, and Claudia after getting signed off as a Captain with United Airlines 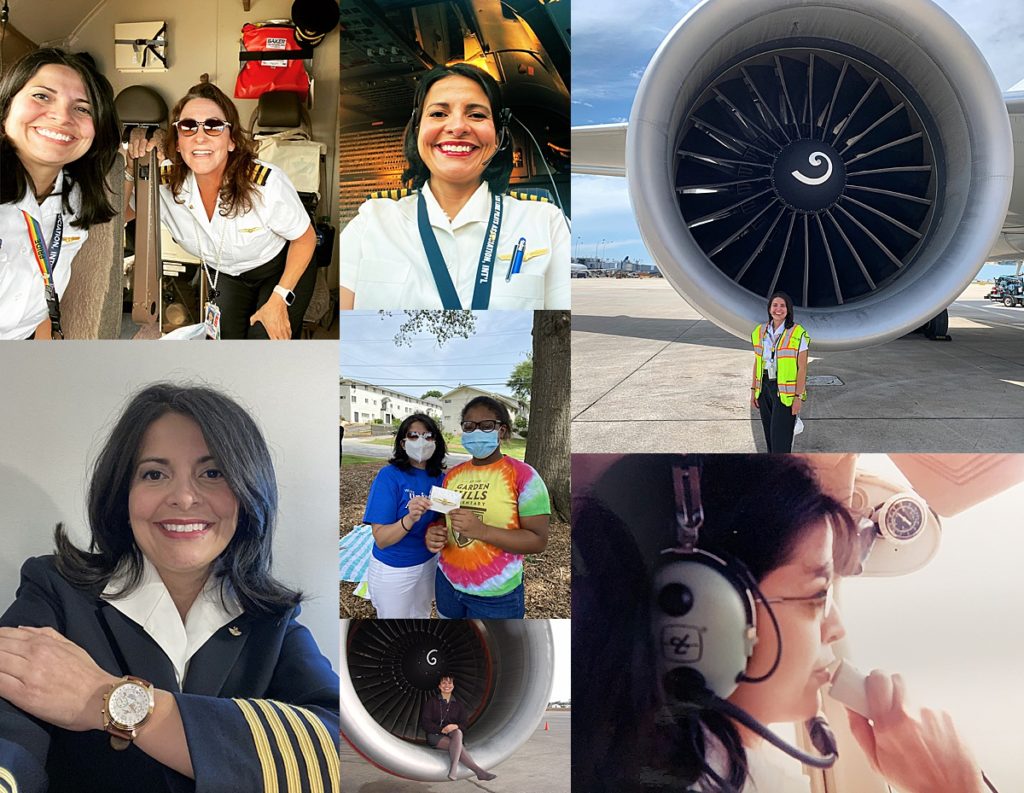