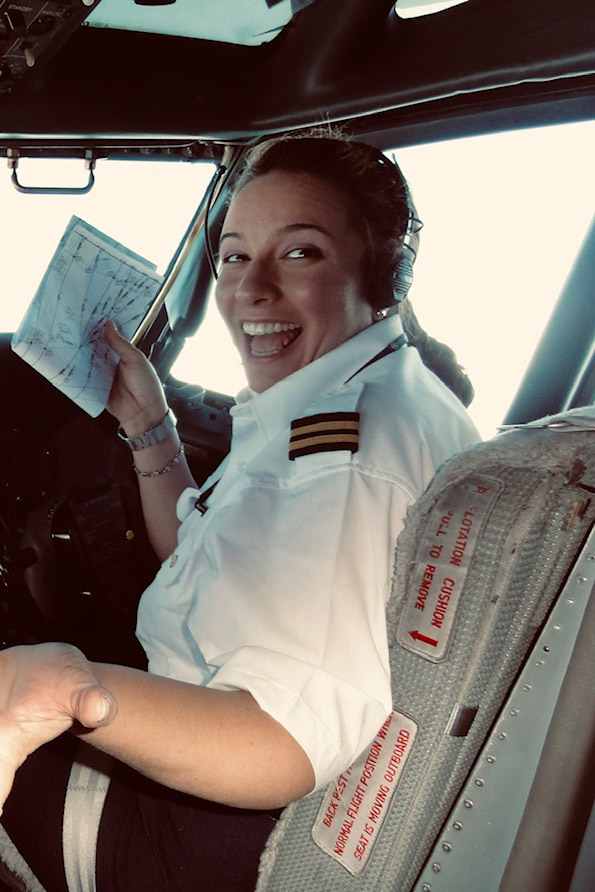 Ana:
I started flying in 1998 at the Aeroclube de Sao Leopoldo, a city about 20 miles north of my hometown of Porto Alegre, capital of the southern-most state in Brazil. Since then, the flight school moved, and its name has changed to Aeroclube de Eldorado do Sul. I did a little bit of my Commercial License hour-build at the Aeroclube de Caxias do Sul, a city further north.

I completed my Private and Commercial Licenses, along with my Instrument and Multi-Engine ratings in three years, to be able to graduate in 2002, with my bachelor’s degree in Aeronautical Science, along with my cohort class. During college, I met my husband, Chad, through an exchange program between his school Embry-Riddle and mine, PUCRS. Soon after I graduated, I moved to the U.S.

In 2007 I did my FAA Private Pilot training at Flying Scotchman in Crystal, MN (no longer in operation). Fun fact, my flight instructor there, Colleen Sampson, also flies at GoJet Airlines. In 2008, I completed my Instrument Rating at FlightSafety Academy in Vero Beach, FL.

Ana:
I flew the Neiva Paulistinha NE56C (PAUL under the FAA type designators), tail dragger, for my Private Pilot training. Then I flew another trail dragger called Aero-Boero and the C-172 for the Commercial portion of my training. After that, I flew the Piper Arrow, Seneca, and Seminole for my Instrument and Multi-Engine ratings. My first job was at VarigLog, the cargo operations of the now-extinct VARIG Airlines. I received my type rating on the B734 and flew a few hours on the airplane before the company also ceased operations. My second and third jobs (Trip Linhas Aereas and Azul Linhas Aereas Brasileiras were merging as I was hired at Trip) led me to fly the E195 and E170.

Ana:
Yes, of course! I stand on the shoulders of my mentors and the people that motivated me and believed in me. I have to mention a few special people that really meant and still mean a lot to me. Our own Captain Kalina Milani is one of those people. I will never forget one of the most memorable days of my aviation career. Kalina invited Angelica, my college classmate, and me to spend the day in Rio de Janeiro and visit VARIG’s CTO (Centro de Treinamento Operacional), VARIG’S training center! Wow! What a day, Kalina! It still gives me goosebumps! We visited the center and got to fly one of the B-737 simulators (see one of the pictures below). It was awesome! Later that day, Kalina headed for the airport to do a shuttle flight between Rio and Sao Paulo. We were able to visit the airplane and do the walk-around with her! It was just unbelievable! We also got cool VARIG t-shirts and souvenirs! We were elated!

Later on, when I joined Trip Linhas Aereas, I was assigned to the best possible IOE instructor, Joao Baptista Alves. We flew together for a few months, and it was amazing. My last flight at that airline (now Azul) was also with Joao, and it was the best sendoff before moving back to the U.S. I learned everything I know about being an airline pilot, from jet flying techniques to the best restaurants and food for the overnights, from Joao. He was also a glider pilot who flew West three years ago. His other pupils (he had quite a few) and I feel a little bit like aviation orphans with our dear mentor Joao’s untimely departure. To this day, I often remember his wise words of advice. Moreover, every time I have a situation that requires different tactics, I think of: “what Joao would do?”

Ana:
My mom always said I got the aviation genes from my dad, even though he was not part of my upbringing. He was an Aeronautical Engineer for VARIG’s maintenance department. But he was long retired by the time I got hired at Variglog. No nepotism there. I got the job referral from a friend’s friend. Both women pilots, proving that networking has a very positive impact on our careers. This person had just declined a job offer from Variglog, and she then referred me to an interview. They were looking for fluent English-speaking pilots at the time, and I fit the bill.

Anyway, when I was a kid, my mom moved us from Rio de Janeiro, where I was born, to Porto Alegre, her hometown. Her favorite newspaper would only come on Sundays at the airport bookstore. Every Sunday, we would go get a copy of “O Globo” newspaper. We would then head to the second floor to watch the airplanes take off and land in SBPA from an open balcony overlooking the runway. I was fascinated by those beautiful metal birds. When I was a newborn baby, my mom said she was traveling from RIO to POA (Porto Alegre – SBPA) when the airplane got hit by lightning. There was some commotion in the aircraft, but apparently, I slept through the whole thing, says the legend. Later, she would travel back and forth, sometimes bringing me with her. She said I would often end up in the flight deck on the flight controls… I am not 100% sure about that. But I remember running through the airplane aisle (probably a 737 from either VASP or VARIG) and feeling the floor under my feet move as the CG of the airplane kept shifting during the flight. It was sooo much fun! When I was 14 or 15 years old, I got to ride in a Aero-Boero while towing a glider airplane, and that was it! I had made my decision. I wanted to be a pilot! Like many of us, I had many detours along the way. But with determination and a village of people to help me through, I conquered my dream!  Also, if I got the aviation genes, it was undoubtedly from my mom, who wanted to be a pilot as a young lady.

Ana:
I had planned to upgrade in the fall of 2019, but my father got really sick, and I postponed my plans to 2020. He passed away in March, at the same time Covid hit. I did not fly much last year. I just started flying full-time again in May. I now plan to upgrade in the fall. I received a job offer to go work for a starter airline from a certain CEO that also started jetBlue Airways. However, in the same week that I was about to move on to my new job, United Airlines announced that GoJet would become a partner United Express carrier with the Aviate program. After six years at GoJet, I decided to stay put and go through the process. My goal is to become a United Airlines pilot!

Ana:
I am a brand-new commuter. I was initially based at home in RDU. I was then transferred to GSO and shortly after EWR. Currently, I am based in ORD. It has required a slight adaptation on my part. However, with the travel up-take, and despite the scarcity of available seats, there is also an increase in direct flights. So far, so good. As a consequence, I find that I spend my time at home more productively.

Ana:
I think not only me but the whole world had to stop and reflect on the effects of the pandemic. I have lost quite a few family members in the past 18 months – half to Cancer and half to Covid.

I was a little disheartened by people’s attitude and lack of compassion during this challenging time. Today, I think people are regaining their understanding of one another, little by little, as we start to go back to a more normal routine, at least here in the U.S. I still feel a bit saddened by the dire situation in my home country of Brazil, where the daily death toll due to Covid is still pretty high (as of June 2021).

Ana:
I just had the pleasure to talk to a couple of graduating classes of 5th graders from Brooklyn, NY, this week. It was a terrific, rewarding experience. But I really felt the impact of this when I received the “Thank You” notes from all the kids! They loved to hear about what the steps are to becoming a pilot. Also, many of them said how cool it must be to fly an airplane. Bianca, one of the students, said:

“…. Something that caught my eye was how the airplane was really fascinating and awesome. You get to control the entire plane and go wherever you want to.”

Talk about taking control of our destinies! I think it is essential to show kids that anyone can achieve their dreams!

When I was starting in aviation, one thing that always bugged me was how everyone in the field would say some things in aviation are just too complex, challenging to achieve, or difficult to understand. Almost as if you had to have some type of super-power to be able to accomplish it or comprehend it. Almost as if they wanted to shroud the ‘rituals’ and procedures in aviation with a mythical aura to make them appear unattainable.

Therefore, I made sure to tell the kids that the universe is the limit! Or is it? I said that nothing is out of their reach as long as they put the work to it. I made sure to tell them to believe in themselves. That they are capable of reaching anything they dare to dream! And to please Ignore the nay-sayers!

Ana:
The camaraderie and the sisterhood! To be able to share stories and talk with one another about the same challenges and the same rewarding experiences we each go through. Like for instance, flying a jet and receiving compliments of a wonderful flight from our passengers. Or giving and receiving advice on how to handle a difficult situation. It is invaluable. I think women are naturally more sharing, more collaborative. Sharing our experiences and bits and pieces of wisdom with one another is the best part of our community. All these sisterly interactions make my world a little bit better and more colorful every time! Thank you for the opportunity to share a little bit of my story with this fantastic group of women that I am very proud to be part of!!! 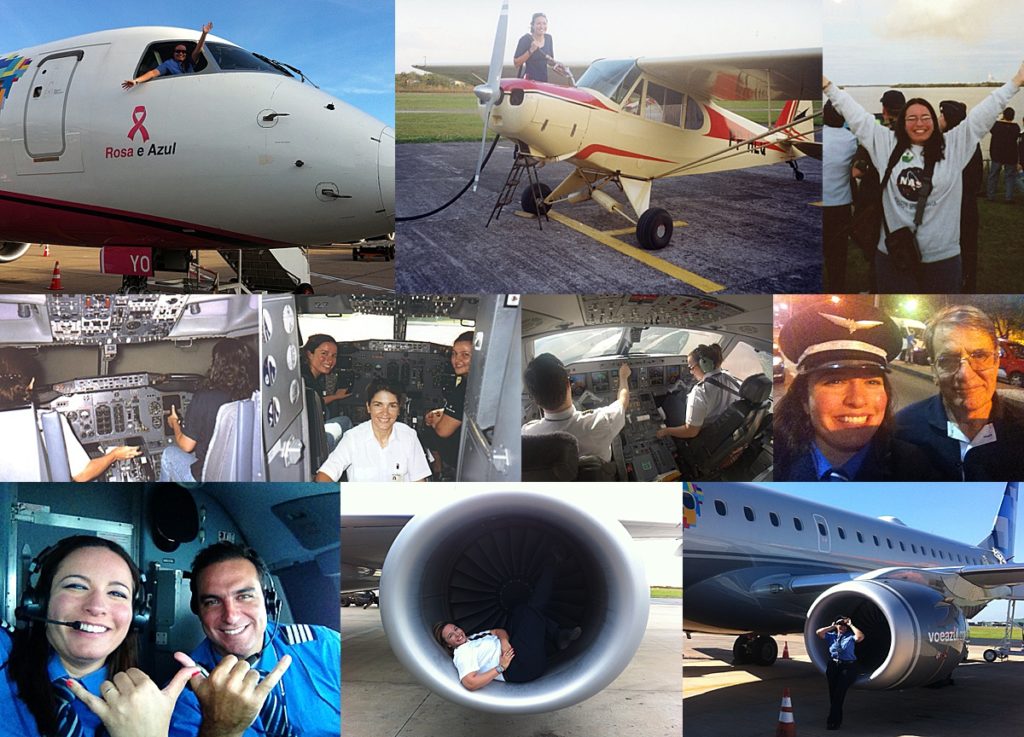